top of page
Home → News → On Top of Their Game

On Top of Their Game

After Soccer won the Northern California championship, Lexi Zandonella is honored as NCS Soccer Player of the Year. 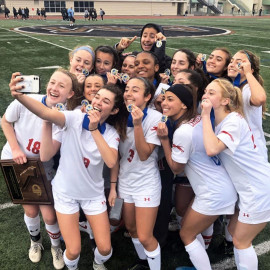 The Cougars defeated Mitty 1-0 to win the championship on Saturday, March 7. Ellie Ospeck scored the lone goal in the 65’ with an assist from Elizabeth Vranesh. GK Maddie Buckley tallied four saves in the shutout.

Carondelet entered the CIF Northern California Regional Championship as the #8 seed and won all three matches on the road. First, they beat #1 Clovis West. Then, they beat #5 St. Francis – Sacramento.

The team finished the year 23-5-1 and champions of the East Bay Athletic League. A year to remember! 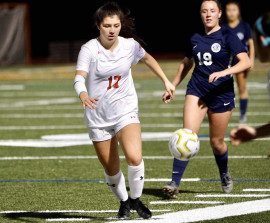 Prep2Prep named its all-NCS team and individual awardees, including these Cougars:

Jordyn Young – Junior of the Year

The Mercury News Bay Area Preps HQ has recognized senior Ellie Ospeck and Carondelet Soccer in This Week’s Stars edition. The Notre Dame-bound forward broke a scoreless deadlock at Archbishop Mitty to claim the CIF NorCal Division I title. With the 1-0 victory, the Cougars completed a Cinderella run as the No. 8 seed winning all three matches on the road!